The Buzz: Putting Toronto on the Map

A How-to guide for self-coached teams

Since late 2013, I have had the pleasure to work with a group of fabulous dancers in the troupe That Swing! Many of us felt that working towards a big goal would help push our dancing and to help us to develop as a team. No one from our city had ever taken a team to the International Lindy Hop Championships (ILHC), but I had attended in 2012 and loved the atmosphere: The energy was high, the social dance floor was full, and the competition was fierce but the competitors were supportive. I was overwhelmed with happiness when the group took my suggestion seriously, and we decided to compete!

.
What we were up against

We knew that by taking our team to this event, we would be up against international professional dancers as well as teams with years of competition experience. Here are a few fun stats about That Swing!

2)      Some team members had never participated in a Lindy Hop competition; others had their first competition experience at either O’Town Showdown 2014 or Montreal Swing Riot 2014 (links).

3)      Only one team member had ever attended ILHC

Basically… we were kind of new at this! But we were determined to combine our strengths to overcome our lack of experience with this type of competition. We thought that there may be other dancers out there in a similar situation, so we thought that we would share the process we used to democratically create and rehearse a choreographed number.

To choose a song, we all threw song ideas into the mix, then had a meeting where we listened to the songs, danced socially to them, and discussed various pros and cons.  We took a vote among our favourites, and unanimously chose: Focus Pocus, from the new Glenn Crytzer album!

Mandi Gould, the founder of Bees’ Knees Dance and a very experienced choreographer, once told me that audiences (and judges) will only remember two to three things about a routine. If we could decide what we wanted those things to be, we could choreograph to highlight them. We watched some of our favourite routines from past years, and tried to articulate what was so great about them. We set up a facebook poll to help us decide as a group what we wanted our routine to be remembered for: 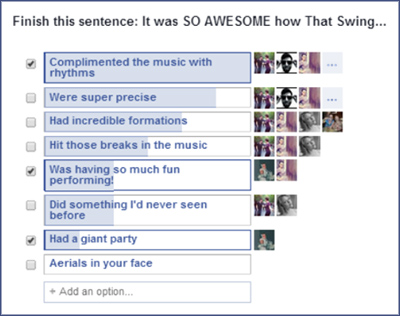 It looks like a rhythmic, super precise routine with incredible formations was in order! With that in mind, we assigned two dancers with different perspectives to map out the sections of the song, and to make an over-arching plan of what the routine would look like. I contributed my years of Lindy Hop choreography experience to this task, and Kris Light contributed her perspective from years of writing choreography for modern jazz, tap, and musical theatre routines.

Getting down to it

With a map in place, partners or individuals chose sections that they were particularly excited about, and we split up to work on the choreography. We asked everyone to roughly choreograph, but to be open to suggestions from the rest of the group and to be open to having their choreography changed to fit the overall flow. We then took turns presenting our choreography to the group, and working as a team to clarify spacing and make stylistic choices.

I’m not going to lie – there were some tough choices to be made through this process. Handing choreography that you worked on over to a group to critique and change can be hard on the ego, and I could write an entire blog post on the challenges of incorporating the opinions of eight equally talented and invested dancers. Overall, though, we felt that the diversity among our choreographers/dancers was a huge asset to the final product.

Yaaay, we had a routine! But there was still a lot of work to do. With two months to go before ILHC, we invited three fantastic Toronto coaches to help us. Caitlin Wellman  helped us “bring out the Lindy Hop” in the routine by suggesting that we remove some breaks to make the routine flow better, and gave us some invaluable advice for competing under pressure. Jasper Palfree has a great eye for effect, and helped us to bring out some of the character in our routine. Arthur Lulu helped us to drill our basics, grounding the more creative/non-traditional aspects of our routine in good technique. A huge thank you to our guest coaches!

In our final practices, we would often watch a recording of a run-through from the practice before, and work as a group to make notes. We would then run through our list, improving, clarifying, and adding styling to each section in an iterative process. The goal was always to take the “worst” section of the routine, and work on it until it was the best section. Another technique that worked well for us was to video tape a section, then choose a couple who looked particularly good doing it. We could then use them as a model, and match the style to theirs.

In some ways the time flew, in other ways it felt like we’d been working on the number forever. But August 20 rolled around, and we packed our bags and headed to Washington! Here is the final product.

We are extremely proud, and would like to extend the hugest thank you possible to our coaches, family, friends, and community here in Toronto. And hey – the judges liked it too, and ranked us in third place!

Thinking about choreographing a routine, but don’t have a lot of experience? Feel free to contact us, we would be happy to share in more detail!

The Buzz: From Swan Lake to Swing-Outs

The Buzz: Music for the (young) Lindy (grass) Hopper

The Buzz: Kick-start Your Improvement