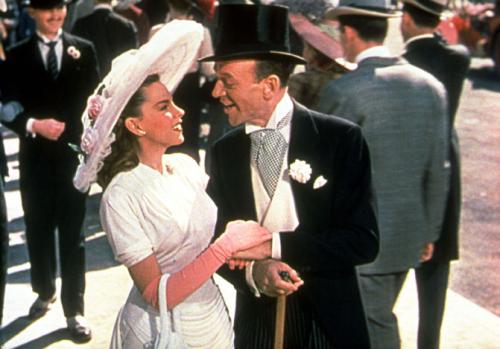 I just got back from an extended Easter long weekend in New York City which included swing dancing in Harlem on Thursday night, Swing 46 on Friday night and a touch of Lindy Hop at the Easter Parade on Sunday. Here’s a little videography my husband put together from the trip.

Arriving in New York, we checked in to our hotel. It was very well priced, probably because it’s overlooking the rather morbid site of the World Trade Center. Still a lucky find and we were satisfied with it. We did a good welcome walkabout the city including Grand Central Station, a walk up Madison Avenue, etc. It happened to be Geoff’s birthday and we celebrated in a very memorable way; swing dancing in Harlem! This was at Tian’s on the water and the band was the Harlem Renaissance Orchestra. Fantastic. It was great to see Judy Pritchett there and to celebrate Geoff’s birthday with a little dance jam.

Another great walk around day, though still chilly. A nice New York style breakfast, a stroll across the Brooklyn Bridge,  a walk through Central Park, delicious Macarons at Le Maison du Chocolat in the Rockefeller Center, riding the vintage escalators at Macy’s and rounding things off with an evening of dancing at Swing 46.

A rainy and slow start on Saturday, we weren’t able to visit Barney Greengrass  snce it was closed for Passover. Since it was raining we thought we’d hit the Museum of Natural History but of course the entire city of New York had the same idea so that didn’t work out either. Instead we enjoyed a slightly soggy walk through Central Park, a pop in to Bloomingdale’s, the New York Central Public Library… and then our batteries died. We rounded off the day with more walking and then a fabulous gourmet raw meal at Pure Wine and Food Bar.

The big day! Easter Sunday! I accompanied Geoff to a Church uptown which he enjoyed visiting very much. We headed back downtown and got in a quick brunch before hitting the famous New York City Easter Parade! This is what we’d really been looking forward to and we weren’t disappointed. The weather turned out to be beautiful, and we enjoyed strutting in our vintage finest (my only truly vintage dress since I destroyed all the others by dancing in them), admiring some of the other paraders and having our photograph taken more times than we could count. There was a charming band playing and we ran in to a couple of friends there; Adam Lee, who I got to know in Beijing, and my dear old friend “Doctor” Dan who I hadn’t seen in years. We got in a little bit of dancing despite the heat and concrete and really enjoyed ourselves. Then we hit the Carnegie Deli which was actually open despite passover. That evening we checked out the view from the Top of the Rock (Rockefeller Center) and went home tired and happy.

Our last day was spent making up for some of the lost time on Saturday. We hit the Museum of Natural History in the morning, then zipped down to Little Italy for lunch. Back to Macy’s to pick up another great jacket for Geoff and a few more macarons for good measure. By the end of the day we were pretty tired so we grabbed takeout dinner from Peanut Butter & Co. because as many of you know, I do love a good peanut butter sandwich! We took it to a movie and called the day a wrap. This morning we had a nice breakfast at Kitchenette in Tribecca before coming back home.

Song of the Week! October 21st – I Hear Music

Dear Social Lindy Hoppers – a message to Leaders and Followers

The History of Swing – Video Recap!

Song of the week! November 17th, Take The “A” Train, Duke with Ella!